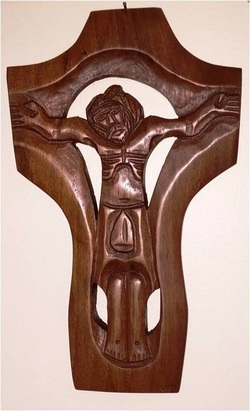 Son Richard and Jim took a trip to Europe, cruising the Danube River. They ended their tour in Budapest.

While in Budapest, they toured St. Stephen’s Basilica. This church was named for Stephen, the first King of Hungary     (c 975–1038), whose supposed right hand is housed in the reliquary. It is the third largest church building in present-day Hungary.

They purchased this hand carved wooden crucifix there and in December, 2015, gifted it to dad, Richard.

The crucifix is from the studios of Apró Tamás fafaragók, in English: Tiny wood carver Thomas.

Return to Wall of Crosses