Once again the phone woke us at 6:30 AM for our day of touring. The shower woke us and we dressed for the day. No jackets are needed. The day was sunny and warm - once again the temperature was comfortable.

After a breakfast buffet that included all the delicacies from yesterday plus some more, we boarded our buses for the ride up the Mount of Olives. The Mount of Olives is only one of the seven hills (mountains) that Jerusalem is built upon. The others being, Mount Scopus - famous for being the first view of Jerusalem, Mount Moriah, Mount Zion - where the Upper Room is believed to be located, Mount Calvary - the mountain of the death, burial and resurrection of Jesus, Mount of Scandals - where King Solomon built pagan temples to please his wives, and the Mount of Evil Counsel.

We gathered for a group picture at the top of the Mountain. As we gathered, we were joined by hundreds of pilgrims and visitors. Some of them purchased camel rides, some of them purchased souvenirs from the street vendors, all of them were approached by various beggars. It reminded me of what it must have been like during the time of Christ.

We walked down a steep incline known as the Palm Sunday Road. (Named because this was the traditional route from the Mount of Olives to the Golden Gate) the gate through the wall into the city of Jerusalem. The gate was directly across from us - through the Kidron Valley. Our first stop down the mountain was at the Necropolis - the "city of the dead." This site contained underground burials. There were usually two burials - the first burial was when the body was wrapped and laid into a tomb until the flesh was decayed. The second burial was when the bones were gathered and laid to rest. During the First Temple period the bones were thrown into a common pit. During the Second Temple period, the bones were gathered and laid into a box or placed inside of a shaft. The shaft had a large round stone rolled in front of it. Wealthy people could afford a shaft for one body. Others had to have more than one body buried in a shaft.

From there we walked to the Dominus Flevit (Tears of The Lord) church. The Necropolis was on the grounds of this church - much like our churches have church cemeteries.
The church was built over the traditional spot where Jesus looked across the Kidron Valley at Jerusalem and wept. He wept for those that would be lost, He desired that He could gather the city under His wings much as a hen gathers her chicks under her wings for protection. The church was built by the Italian architect, Berlucci. He designed the church with a type of rock that absorbs water. When the rock fills with water, it will "weep" - water runs down the walls. This water represents the tears that Jesus shed. The altar area of the church faces the city of Jerusalem and depicts Jesus weeping. The dome of the church is shaped as a tear drop.

We walked down the hill to the Garden of Gethsemane. Gethsemane means, "Olive Press" - there were very old Olive Trees standing in the garden. The garden was very quiet, peaceful and smelled beautiful. We smelled cedar and very fragrant flowers. The Church of the Garden of Gethsemane was also built by Berlucci. He built the church over the rock that tradition says Jesus laid on and prayed on the night of His betrayal. The church also told a story - it was built with dark windows to signify night, the rock was encircled with a fence of thorns to signify the crown He would soon wear, and the altar was built in the shape of a cup to signify the cup of suffering He would soon take on for all of us. The emotions inside the church were strong as we remembered the suffering of Christ. The many languages spoken inside of the church reminded us of how He paid the price for all people's sins.

After a walk to the bottom of the Mount of Olives, we boarded our bus for the drive over the Kidron Valley, into Jerusalem. We arrived at the Church of Saint Peter - the traditional site of the house of Caiaphas - the high priest. Inside the church we descended into the lowest depths - our first stop was at the prison. We entered a stone room that had holes cut into the ceiling so that a prisoner could be chained. There was a depressed section behind the area for the guard to whip the prisoner. There was also a platform where a guard could keep an eye on the prisoners and look into the pit. The pit was a lower section that dangerous prisoners would be lowered into and left alone. The pit was narrow and dark. Some think that Jesus was held in just such a pit (perhaps this one) to fulfill the prophesy of Psalm 88. Pastor Hahn read the psalm and it was very emotional to realize just how much suffering our Lord endured for you for me.

We climbed the steps and entered the courtyard of Caiaphas. This is the site of the three betrayals of Peter. There is a statue that depicts his denials. Just as the church bell struck noon, a cock (rooster) was heard crowing. It, too, reminded us of how Peter denied Christ and the cock crowed.

Next to the courtyard were a set of stone steps that led down into the Kidron Valley. It is historically accurate that Jesus walked on these very steps. This is assured by the fact that the steps were the only way to enter the valley. The steps remain today. We walked on the steps that Jesus walked. It is hard to put into words the emotions people felt - some cried, some prayed, everyone was moved.

We drove to the site of the "Upper Room" - the place Jesus had the Last Supper. The room was a large open room at the top of a building. The room is not the authentic room, however, it is built somewhere near the original spot. The room was not as impressive as remembering what happened in that room - the Last Supper, the appearance of Jesus to the disciples, and the outpouring of the Holy Spirit. Next to the room was the Dormition Abbey - one of the traditional burial spots for Mary, the mother of Jesus.

We drove to the Kibbutz Ramat Rachael for lunch. A kibbutz is a community of people living together in common. There are over 300 Kibbutz communities is Israel. Each community is centered around a common activity - such as farming. There are only five religious Kibbutz communities in Israel. We ate lunch in a kibbutz revolving around guests - hotels, restaurants and gift stores. The meal was served cafeteria style. We had a lunch of breaded turkey breast, rice, beans and carrots. For dessert we had three pastries - the best one was a pistachio nut one. The two cokes whetted a parched mouth. Some of the group had salads, some chicken - all of us called the meal '"good."

We drove to Bethany - the home of Mary, Martha and Lazarus. Their house is now a church - also built by Berlucci. The church had no windows - to represent a tomb, mosaics that told the story of Mary and Martha, and one that pictured Lazarus coming out of his tomb at the command of Jesus. The church had an echo that made it hard to speak, but beautiful for singing. We sang "The Common Doxology" that rang out to the heavens.

A walk up the hill brought us to the Tomb of Lazarus. We had to walk down step steps and crawl into the tomb backwards. We did this in order to circumvent the normal tomb opening, this opening is now the site of an Islamic Mosque and we as Christians would not be allowed to enter the Mosque. Our opening was dug by Christians wanting to visit the tomb site. It was a funny feeling to be in the tomb and then step forth into the sunlight. Perhaps this foreshadows our own death as we are laid into a tomb only to step forth into the Son-light of Jesus. It was very comforting to know that we will not stay in a tomb, but rise from the dead into glory.

Our day ended as we drove through Bethany. Bethany is a very crowded, noisy city with street markets, many furniture markets and children begging for money.

Tonight at the hotel we look forward to dinner and rest in anticipation of tomorrow. 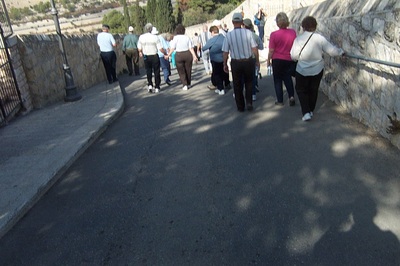 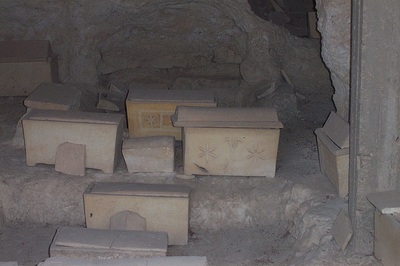 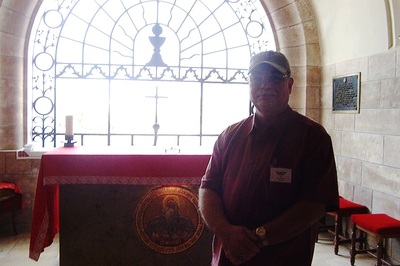 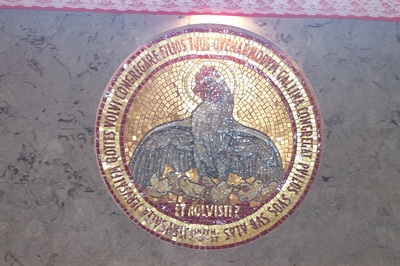 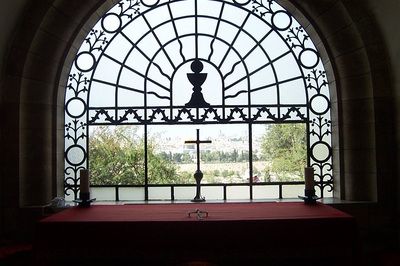 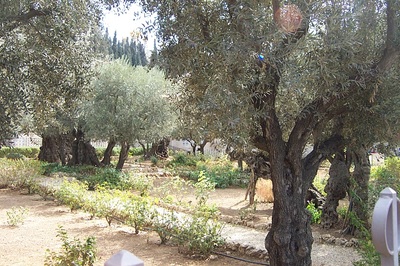 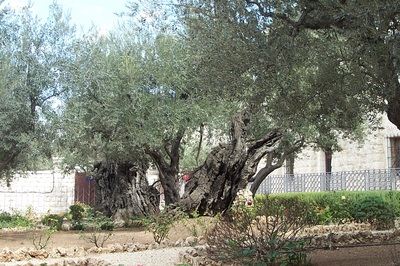 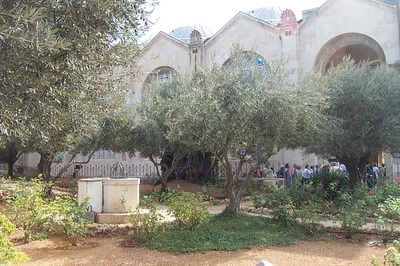 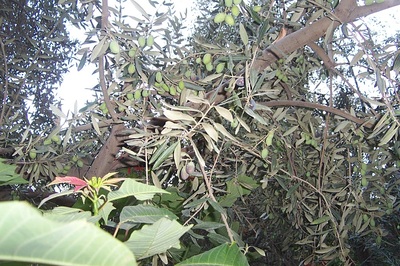 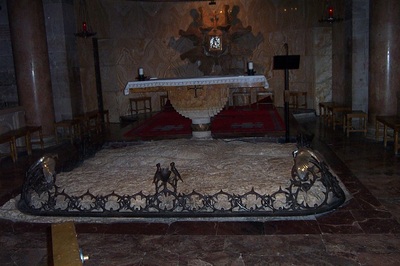 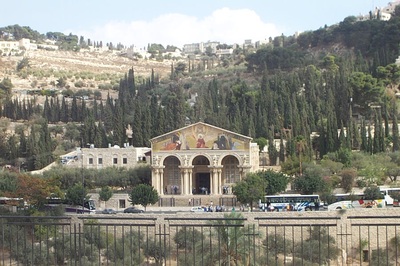 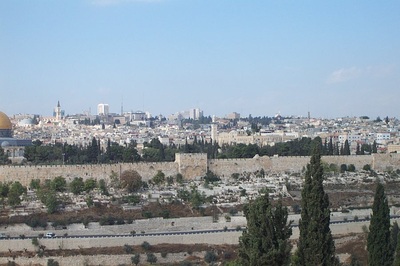 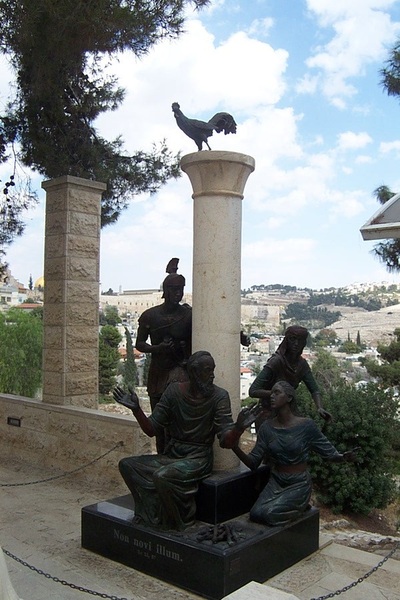 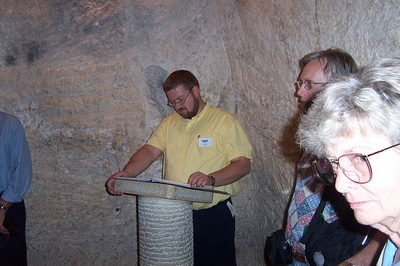 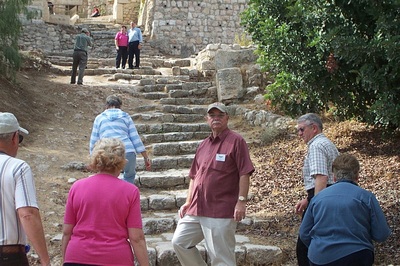 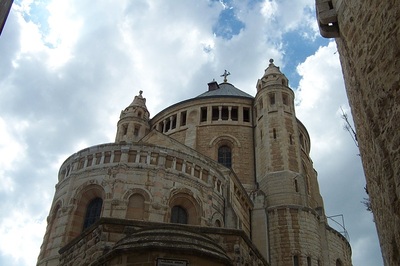 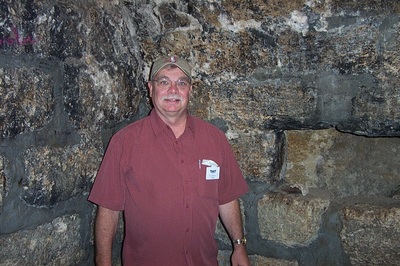 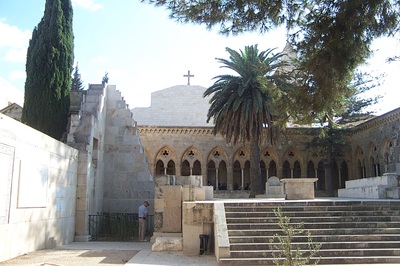 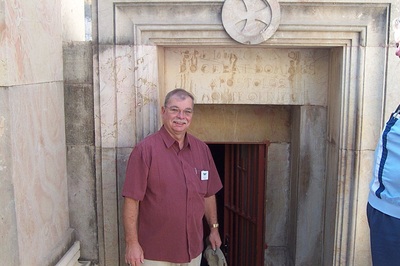 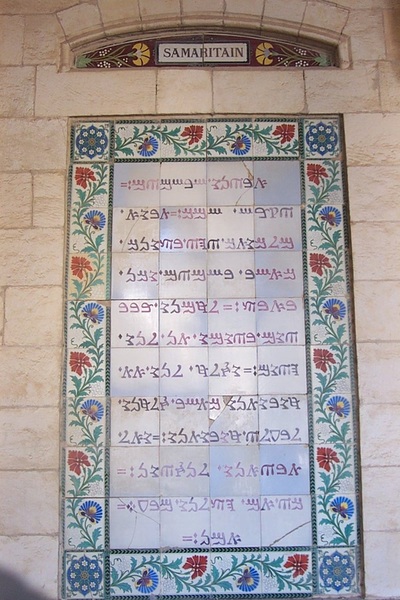 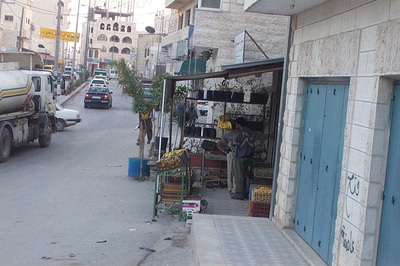