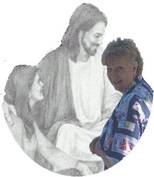 ​On August 24, 2004, the Lord called Bunny home to Him in Heaven. She battled her cancer for over 13 years. The last bout was the hardest. The cancer had settled into her bones. The doctor administered treatments that gave her three years. Those were very appreciated years. During that time we were able to travel, visiting Alaska, Hawaii and many other states.

Her fight began in 1991 when she was diagnosed with breast cancer. After radical surgery and chemotherapy she was pronounced cancer free after five years.
In 2001 the breast cancer returned, only on her bones.

Her faith and love will always be remembered.