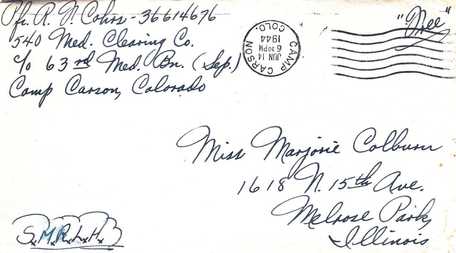 Richard (Dick) Frederick Cohrs spent an uneventful childhood pursuing the activities common to boys of his time – playing outside, going to the movies, riding bicycles, fishing and going to school.

His world was changed on December 7, 1941, with the attack on Pearl Harbor and the subsequent War. His two older brothers enlisted shortly after that. Richard was a senior in high school when the hostilities broke out. He graduated in May, 1942, and was summoned to take his service physical exam the following December. After passing his physical he was ordered to report for duty in February, 1943, giving his mother another blue star to add to her flag.

Across the street lived a young lady, just a year younger than him, who attended the same high school. He would often see her as she walked down the street. One day he approached her and it was love at first sight.

They started dating and soon knew they were meant to spend their lives together. However, the war forced them to put any future plans on hold as he entered the service and she found a position with Vulcan Stamping and Manufacturing Company. This company manufactured needed materials to support the war effort.

Separated by the war, they resorted to sharing their hearts with one another through letters. With only a few furloughs offering them time to enjoy each other’s company, the letters allowed them to “see each other” through the lens of shared text.

These letters tell the story of two young people whose future lay in the hands of others. They tell of routine, hopes, feelings and love.

May you be inspired as you read their love story.
Click here to enter the world of S.M.R.L.H.