Today we awoke at 6:00 AM. It was sunny and very pleasant. We dressed and went down to the dining room for what is fast becoming a traditional breakfast of eggs, French toast, olives, tomatoes and cereal. The rolls are very tasty.

The reason for the early start was a long journey down the Jericho road to Masada. We go “down” the Jericho road – literally. Jerusalem sits on seven hills and is above sea level. Jericho is below sea level, so the road goes “down” in elevation. Along the way we passed rock formations colored red. The red coloring is caused by minerals.

On the way to Jericho, we passed the “Good Samaritan” Inn. This building sits along the road which Jesus spoke about in the parable of the Good Samaritan. The area is desolate and the story became alive as we passed on the road. We passed a Bedouin settlement complete with tents, people dressed in robes and flocks of goats.

Soon we passed a turn-out on the highway where a camel was kneeling. A Bedouin man was offering camel rides. The turn-out signified that we just passed sea level. For the majority of the day we were below sea level. We passed signs that indicated we were -150 m (about 475 feet below sea level) and then -300 m (about 950 feet below seal level). The road ended at the edge of the Dead Sea, elevation -411 m (about 1300 feet below sea level). We turned south on the way to Masada. The weather became very warm, the land was very hilly and sandy. However, we passed large groves of date palm trees, citrus trees and other green areas. The soil is very fertile so that wherever there is water, crops will grow lush. The biggest surprise was a large grape vineyard. The water for irrigation comes from rains and runoff. Since the Dead Sea is the lowest point in the area, all run off water will find its way to the area. The Dead Sea is the lowest point on the earth. It is slowly growing smaller due to evaporation. It is presently 38 miles long and about 12 miles wide. It is surrounded on the west by the Moab Mountains of Jordan and on the east by the mountains of the east rift valley.

We arrived at Masada. Masada is a fortress. This fortress is on top of a high mountain surrounded by deep valleys. On the top of Masada is a walled structure which is the remains of a fortress built by King Herod. This is the same King Herod who killed all of the male babies in Bethlehem after the birth of Christ. He commissioned a fortress to be built on the top of the mountain. The walled fortress was built with two palaces, baths, living quarters for servants, food storage areas that held enough food to last for years, and a large water system that guaranteed a supply of water to last as long as the food. It is believed that King Herod may not have spent much time at Masada, but it is recorded that his wife and mother-in-law spent three years there. Herod built a series of fortresses because he was afraid of the Romans, the Jews and the other empires of the world. King Herod died in Jericho in 4 BC. After his death Masada lay vacant.

In the year 66 AD the Zealots (Jews who revolted against Roman rule) were defeated in Jerusalem. The remnant escaped to Masada to avoid death or capture. In the year 70 AD the Romans completed destroying Jerusalem and went to look for the remaining Zealots.

The Romans laid siege to Masada for three years in an effort to kill the Zealots. The siege didn’t work due to the large quantities of food and water left from the time of Herod. The Romans used their catapults to throw large rocks into the fortress. This also did not crush the rebellion. Finally the Romans built a large ramp to walk up into the fortress. The Jews in the fortress realized that they would soon be over run and choose to kill themselves rather than be captured by the Romans.

A high point of the day was a devotion by Pastor Klaus on the top of Masada. It was very hot and dry on top of the mountain. The size of the buildings and the intricacies of the structures showed a high level of engineering skill on the part of the builders. One example was the baths. The bath area had three rooms – the cold water room, the warm water room and the hot water room. The floor of the hot water room was built over pillars that held pots for fire. A chimney system brought heat into the room. It was a forerunner of the modern day sauna.

We took the cable car down the mountain to drive to the Dead Sea. It was time for a refreshing dip in the Dead Sea. The sea is filled with so many salts and minerals that nothing will live in the water. Any fish that strays into the sea from the Jordon River dies within minutes and is covered with salt. However, it is safe for us to swim in the Sea. We walked into the sea and sat back. We could sit or lie without sinking. The sea contains 26-28% minerals and salts – more than nay other seas in the world. It was very relaxing and refreshing – to take a fresh water shower after our dip.

We headed north to Jericho – which means “City of the Moon.” It is called that because of the clear night air that allows the moon to be seen clear and bright. In the Arab language Jericho means “Pleasant Smell” due to the many flowers and fruit trees that grow in the area. Jericho is world famous for the many citrus fruits grown there. The fresh squeezed orange juice we drank there was the best I have ever tasted.

We passed by a Sycamore tree – made famous by the story of Jesus and Zacchaeus. The tree we saw was probably not the original tree, but it was impressive. Jericho is the oldest city of the world, due to the discovery of a tower that was dated to be 8,000 years old. Jericho is also the city that Joshua marched around and destroyed the walls.

Outside of Jericho is the Mount of Temptation – the traditional site of the temptation of Jesus by Satan. We ate lunch at the Mount Temptation Restaurant. The lunch started with appetizers of humus (creamed chick peas) and olive oil, cauliflower, yogurt and cucumbers, Arabic salad, Kubbeh (deep fried noodles with minced beef in the middle) and avocados. The main meal was beef and chicken Kabobs with lamb chops with French fries.

After lunch Pastor Hahn and Mr. Cohrs shared a camel ride. (It was scary.)

We rode the Guinness Book of World Records longest cable car operating below sea level. It starts at -219 m and ends at -50 m. We departed the cable car and walked up 150 steps to the Monastery of Temptation, also known as Quratan. This monastery houses a Greek Orthodox order that studies on the mountain.

The weather was tropical and very warm. It was more humid up the mountain then anywhere we have been so far.

We arrived back at the hotel for dinner and bed. Tomorrow – Jerusalem – the Old City. 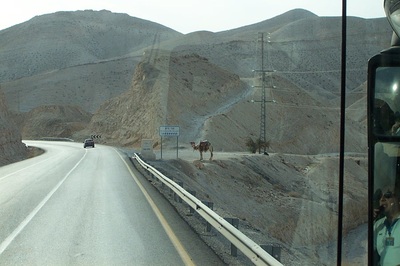 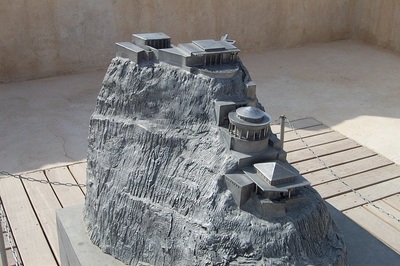 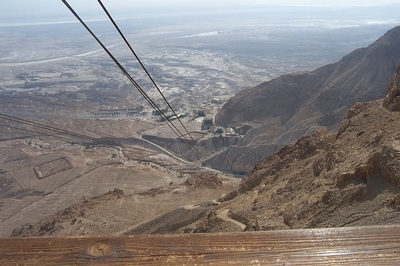 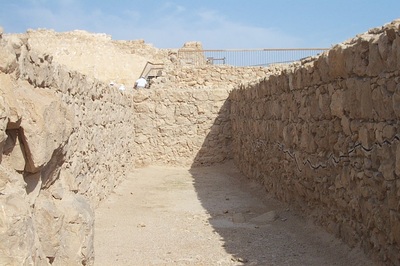 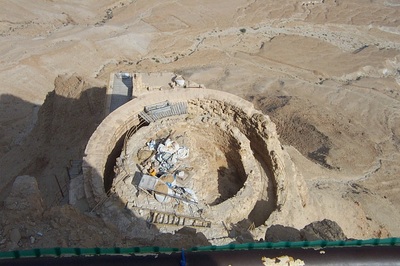 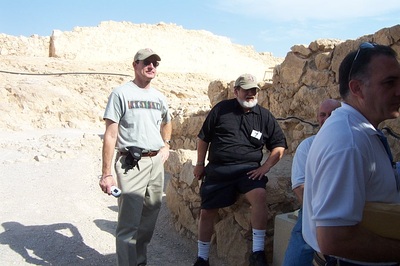 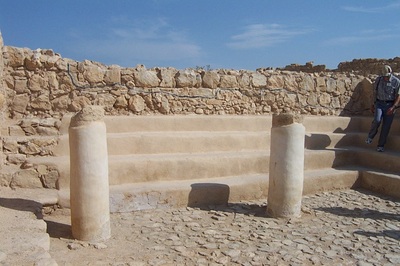 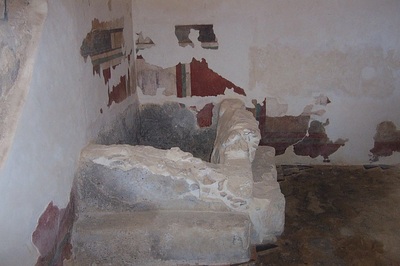 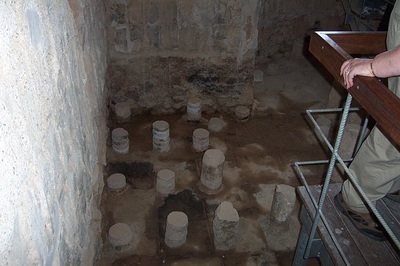 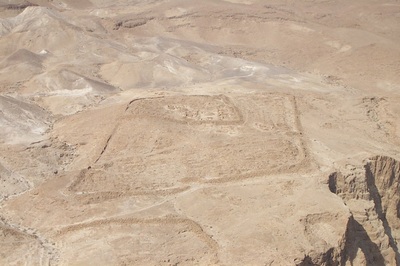 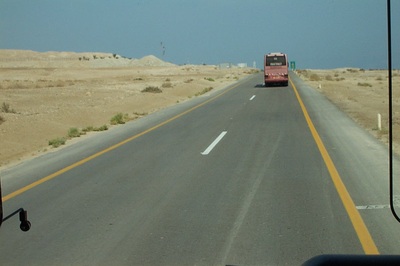 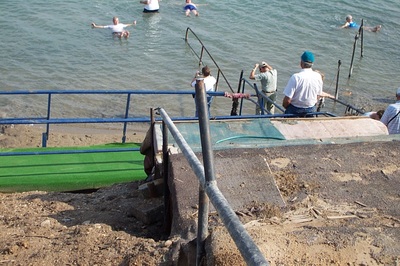 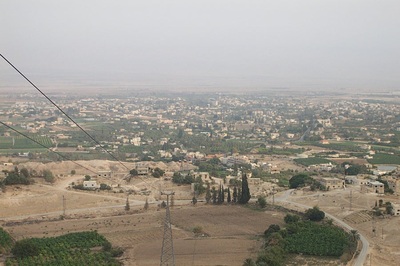 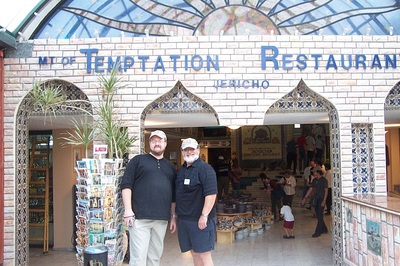 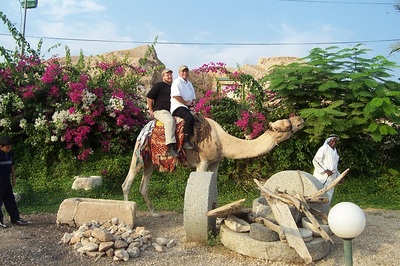 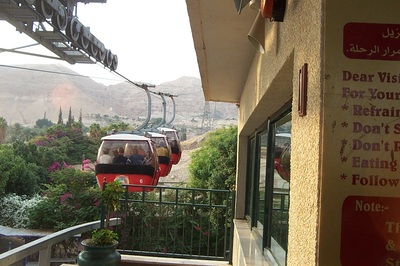 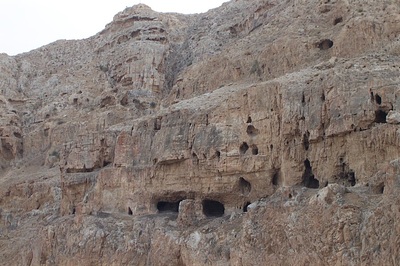 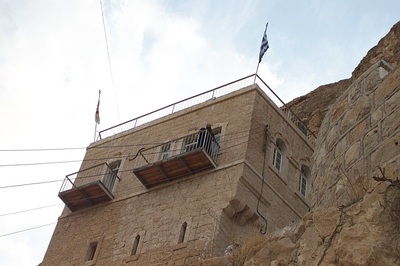 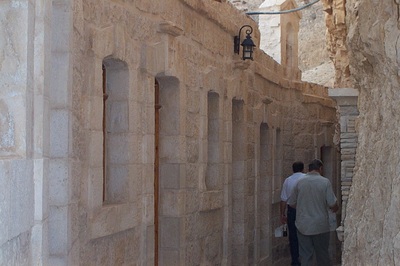 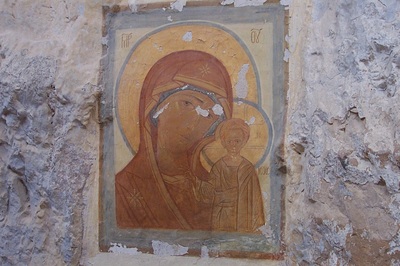 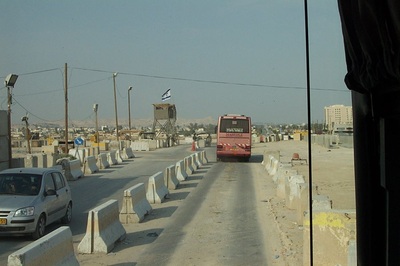 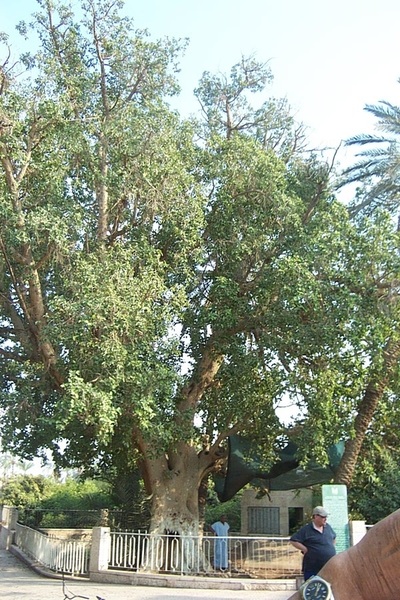 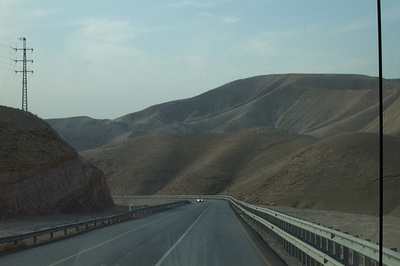