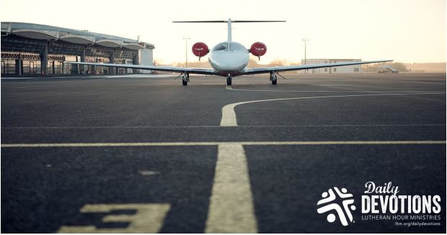 For many years, Pastor Ken Klaus, Speaker Emeritus of The Lutheran Hour, has been writing Daily Devotions for Lutheran Hour Ministries.

In January I wrote a devotion that I sent to him for his use.

He honored me by publishing it on February 12, 2018, as part of Lutheran Hour Ministries Daily Devotions.

I thank and praise God for the gift of Pastor Klaus and his devotional writings. I feel a small sense of the humility he feels each day as his words are printed to share the Gospel. I pray that you know the love of Jesus.

Isaiah 52:7a - How beautiful upon the mountains are the feet of him who brings good news.

With only the most modest of editing for the purposes of space, the following devotion was written by Richard Cohrs, a dear friend and retired employee of Lutheran Hour Ministries. His beautiful, albeit unnamed, wife is Carol.

The other day my wife and I flew Southwest Airlines from Flint, Michigan, to St. Louis, Missouri. Switching planes in Chicago, we had time enough to enjoy some of the best of the Windy City's cuisine: hot dogs and Italian beef. That still gave us plenty of time to get to our next gate.

For those of you who don't know, Southwest Airlines doesn't assign seats. Boarding is determined by a letter and number which is printed on your ticket. After you are on the plane you can plunk down in any open seat you wish. To facilitate the boarding process, passengers are asked to line up about ten minutes beforehand.

It is a smooth process, and my wife and I were almost on the plane when there was a problem.

The fellow ahead of us had a boarding pass the electronic scanner didn't like. The gate agent tried numerous times to scan the boarding pass, but each time it was refused. With each rejection, the man became more upset, insisting the fault was in the machine and not his boarding pass. Eventually, the gate agent discovered the problem; the man was trying to get on the wrong plane.

His flight had already boarded and left without him.

I do not know why the man missed his flight, but I do know it wasn't because Southwest didn't try. Every flight has a minimum of three loud-speaker announcements, and there are numerous illuminated flight signs which are continuously being updated. And, if that isn't enough, the airline will call for a passenger, by name, if he fails to show up while the plane is being boarded.

With all of the information available to him, some of you may wonder how he missed his flight.

I don't wonder. I understand. You see, I almost missed my flight. When we were still in Flint, I got involved in a conversation with some very interesting people. We talked, we laughed, we shared stories, and I did not hear any of the airline's announcements. I made my flight only because my wife sought me out and told me personally that it was time to get on the plane.

In today's world, there are various and many ways that the Good News of Jesus is being shared. There is radio, television, internet, print, mailings, billboards, church signs, and even prayers printed on fast food wrappers.

All of these are inviting people to know more about Jesus.

Which makes it hard for us to imagine that there is anybody who is still ignorant of Jesus and all He has done to forgive and save us. Yes, it's hard to imagine, but the truth is there are many millions out there who have not heard or heeded the Holy Spirit's calling. It makes little difference if they have not heard or heeded, either way they are missing God's gracious call to salvation and eternal life.

Now I made my plane because my loving wife cared enough to seek me out and offer a personal witness.

My wife is beautiful; indeed, but how much more beautiful is that person who loves others enough to find and share a personal invitation to meet the Savior. To invite others to see the Savior is a trust the Lord has given us because He knows, not everybody has met or believes in His Son, the Savior.

THE PRAYER: Lord, thank You for the Gift of Jesus who gives us the gift of eternal life. We ask that You would give us beautiful-feet opportunities, and inspire us to act on them. In Jesus' Name I pray. Amen.