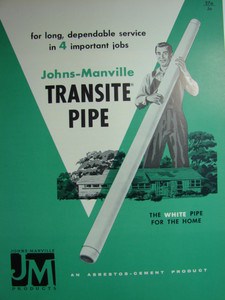 When dad returned from Europe after WWII, he attended De Paul University in Chicago. After graduation he took a job at Hawthorn Melody Farm in Libertyville, Illinois. He worked as a bookkeeper for the farm organization.  Hawthorn Melody was not only a successful dairy farm, but also a mini theme park incorporating a petting zoo, steam train, wagon rides, sports stars, cowboy heroes, and western town and provided visitors with a glimpse into farm life.
I remember dad taking me to see the cows milked, the Old West Town, and the zoo. It was a fun time and dad enjoyed the opportunity to practice his new financial degree.
Then came the time when dad announced that he was getting a new job with Johns-Manville Corporation in Waukegan, Illinois. He worked in the finance department for the transit pipe division.
He had this position for a few years when he was promoted to company headquarters in New York City. We moved to Long Island and he took the train into the city.
He worked at headquarters for a few years when he requested a move back to Waukegan. So we moved back to the Chicago area and he worked his way through the finance department until he was finance manager for the transit pipe division.
In 1973 dad was once again offered a job at company headquarters as the headquarters moved from New York City to Denver, CO.
After he retired from Johns-Manville, mom and he started an antique store called the Painted Pony.
I remember dad as a man who enjoyed his job and was very good at what he did.