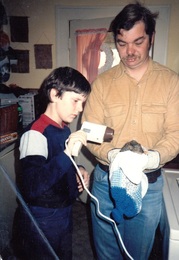 Dean drying the squirrel
The Squirrel in the Toilet

It was a cold day in Wichita Falls, Texas, as Bunny finally had her turn in the bathroom. She had been waiting for a long time since the small house was filled with company. Richard, Connie, Dean Buch were staying with us to celebrate Christmas, 1985.

The house was small, just three bedrooms and one bath. As such, Bunny, the ever-considerate hostess waited to use the bathroom last on the fateful morning.

As she looked into the toilet she saw something dark floating in the water. Not wanting to cause embarrassment, she flushed the toilet. The water swirled, but the dark mass started to move – feet appeared and they clawed their way on the side of the bowl, desperately trying to reach the top.

Bunny was shocked! It was a squirrel.

Rich could barely contain his laughter as he slowly worked his way to the bathroom, stared into the bowl and declared, “There is a squirrel in the toilet!”

Soon everyone pushed into the small room to see the incredulous sight, a squirrel floating in the water.

Rich donned a pair of gloves, fished out the water-logged animal and wrapped it in a towel.

After giving it droppers of milk, the small animal slowly squirmed under all of the attention. It was looking up for the squirrel.

Not wanting to keep a wild animal in the house, it was placed on the branch of a nearby Pecan Tree.

The family finally figured out the poor animal must have climbed on the roof, fell down the vent pipe and ended up in the waste water pipe. Speculations abounded as to how it survived numerous flushes, but the net result was the squirrel appeared alive.

The squirrel was soon forgotten as a day of sight-seeing ensued.

The next morning every person was sure to check the toilet bowl first thing – no more squirrels.

The rescued squirrel was later discovered. It had climbed into a nice fork of the tree, evidently resting. But the ordeal must have been too much for it since it had expired.

We gave it a nice burial under the tree – a long way from water.