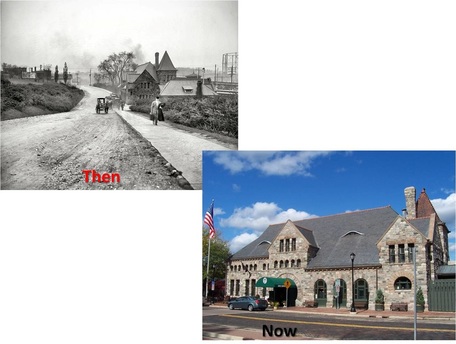 Carol and Rich - Our Fist Date

Carol and Rich – Our First Date
It was late Summer and I had been meeting monthly with the area principals. They welcomed me back to Michigan and were eager to share their comfort, wisdom and knowledge with me.

I found myself asking questions about dating from a fellow principal, Cindy Brown. It had been awhile (a really long awhile) since I had planned a “first date” and I wanted her opinion about the whole “first date” thing.

But I am ahead of myself.

This meant that I would drive to Ann Arbor, MI, once every other month for the day-long meetings.

I found that I had a knack for these meetings, even getting elected a few times later by the District Convention. I was driving to Ann Arbor once a month for about eight years.

Sitting around the table at those meetings was the Assistant to the Stewardship Committee, Carol Bacon. Carol was a typical assistant, allowing her boss to receive all of the compliments of the committee’s accomplishments, knowing that she did all of the background work that made her boss look good. She also had a nice smile and lots of knowledge.

We had become platonic friends, enjoying our committee time together.

When I moved to St. Louis to work for Lutheran Hour Ministries I would keep in touch with Carol, letting her know when a LHM function would happen in her District.

After Bunny died, I moved once again into the principal world as I took a Call back to Immanuel, Sebewaing. I went through a time of separation, grief and isolation. I looked to my fellow principals for comfort and advice.

One day Carol asked if I would help her transfer a VHS tape to DVD. I had nothing else to do so I drove to Ann Arbor to help with what would have normally been a routine task.

I entered Carol’s office and something clicked in my brain – “I think I would like to know more about Carol.”

When my brain clicked, it took on a mind of its own (pun intended). As I tried to connect wires between devices, my eyes saw, but my brain didn’t register what I was seeing. The connections had to be redone, and redone and redone.

After most of the day was gone, I managed to copy one VHS tape. On the way home I was thinking, “I should ask her on a date.”

My opportunity came almost immediately, for while I was in the office Bruce Braun, the Education Superintendent, asked if I would be part of his advisory committee. That would mean a trip to Ann Arbor once a month – on a Friday.

I called Carol and asked her if she would like to have dinner with me the next time I was in the office. She said she would like that and now I had to plan for a “first date.”

I happened to teach computer skills so I asked my class to research the most expensive restaurant in Ann Arbor. The Gandy Dancer made the top of the list.

Next came the entertainment, the class found some “Off – Broadway” live theatre.

The class researched the colors of roses and found that yellow roses tell someone the joy they bring you and the friendship you share.

Their part done I made reservations at the Gandy Dancer for a out-of-the-way table for two. Next, I ordered a dozen yellow roses for the table with a card that read “From your friend…” I talked the reservations clerk at the theatre to get me two aisle seats, three rows back from the stage.

I then went to the store and bought an outfit: suit, shoes, tie, socks and underwear. Then I had the car detailed. (I was bound and determined that if was to be the last date it would be memorable.)

I was feeling pretty good about the arrangements at the Thursday principal’s meeting when I told Cindy Brown that I had made a date with Carol Bacon. I told her the arrangements to see if she would be appropriately impressed. Her response to the whole thing was, “Did you tell Carol it was a date?”

“Well, I asked her to go with me to dinner, isn’t that a date?” I didn’t see the issue here.

She persisted, “Did you use the words ‘This is a date’?”

“No, is that important?” I started to get nervous.

She continued on about how that would mean a difference in mental attitude, dress, preparations, etc. but I didn’t hear much of it since it was getting close to 5:00 PM and the only phone number I had for Carol was her work number – her office closed at 5:00 PM.

I left the meeting early, pulled out my cell phone – no reception.

I drove (very fast) to the only place I knew that still had a pay phone – I needed to make a 25 minute drive in 15.

Pulling next to the phone (it was a gas station and you could call from your car),I put the quarters into it, dialed her office number and got her voice mail.

She got the message, acted nervous the whole time I was at the meeting and looked beautiful.

I opened her car door and off we went for our date.

I wanted to surprise her with the Gandy Dancer (I did let her know to dress up) but proceeded to get lost. The surprise lost some its appeal as she had to direct me to the restaurant.

We get to the table and she kind looks at the roses and smiles – not a big “WOW!” smile, but a “That’s Nice” one. (I found out later that she is really not fond of yellow roses.)

The waitress asked for our drink order and Carol responds, “I don’t drink.” (I thanked God that I hadn’t ordered the expensive bottle of champagne I was going to surprise her with.)

Appetizers were ruled out, (“I don’t really like appetizers.”) so we moved quickly to the main course.  Now the Gandy Dancer is most known for its seafood, being part of the Landry restaurant system. Better fish, crabs, lobster is not to be found in Ann Arbor.  I was trying to suggest the lobster when Carol announced, “I really don’t eat fish or sea food.” (Her choice was easy, since there was Prime Rib.)

The meal concluded and I proceeded to get lost on the way to the theater – again ruining the surprise.

Carol directed me to a Parking Garage near the theatre and I held the door open as she exited the car. I started to fall, since we were on a slope, and she caught me.

It was then that we held hands and she confessed that she missed the touch of another person.  That was “The Moment” that made the date worthwhile.

The show was fine; don’t remember too much from it.

We headed back to her car, parked at the District Office.

We sat in the car, talking, long enough for the windows to fog over – at least 10 minutes.

Just then the patrol lights of a campus security vehicle danced across my wind shield. I laughed, got out of the car and confronted a security patrol officer young enough to be my youngest son. Since I was laughing and he thought that was disrespectful I had to stand there until Carol got out and told him who she was and where she worked.

He apologized – to her – and drove off.

I thank God that we had more dates – no fish – no alcohol – no yellow roses.