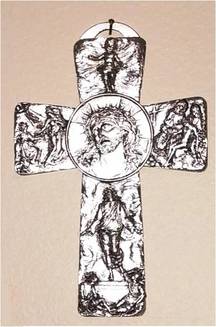 This silver cross features scenes from the life of Christ:

An angel watches from the top arm.

His death is portrayed on the right arm with the scene of the disciples removing His body from the cross. An empty cross is shown in t he top right hand corner of this scene.

The Resurrection is depicted on the left arm. The scene shows the angel talking with Mary, announcing that He is not here.

The bottom arm features Christ ascending into heaven as the disciples look on.

.The center of the cross portrays Christ’s head crowned with a Crown of Thorns. 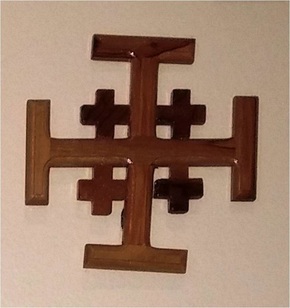 This wooden Jerusalem cross was purchased in Bethlehem, outside the church of the Nativity – the historical site fo the birth of Jesus. On the roof of the church is a large Jerusalem Cross, representing the Crusaders who occupied the area in the earl centuries.

The symbolism of the Jerusalem Cross is as follows:

The Jerusalem Cross represents Christ's command to spread the Gospel around the world; a mission that started in Jerusalem.

It's a busy collection of five crosses and the most common interpretations are:

The four evangelists, Matthew, Mark, Luke and John, with Christ in the center.

Christianity (central cross) broadcast by missionaries to the four corners of the world.

Representative of the five wounds of Jesus on the cross; small crosses for the hands and feet pierced by the nails, and the large central cross for the spear wound in his side.

Finally, as called by some Christians in Jerusalem, a Pilgrim's Cross; the large central cross representing the pilgrim, and the smaller crosses representing those who support and pray for the pilgrim during her or his pilgrimage. 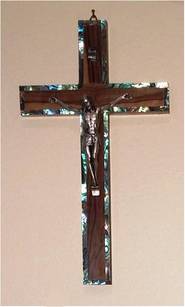 This crucifix features a silver Christ hanging on the cross with a silver scroll above His head declaring Him to be King of the Jews.

The wood is outlined in pear, creating ever changing colors, depending on one’s pint of view.

This crucifix was designed to be carried along the Via Delarosa as a pilgrim would stop at the 14 Stations of the Cross along the way. The reverse of the cross is marked with small circles indicating each station.
Return to Wall of Crosses