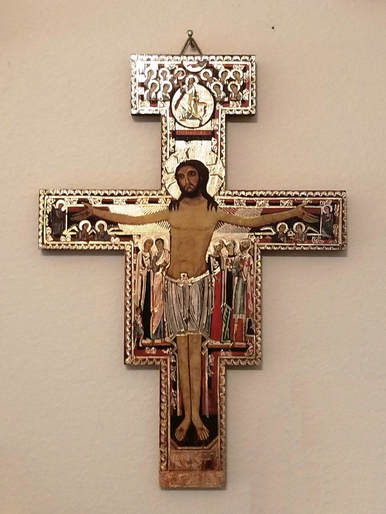 Rich and Jim travelled to Italy. They visited the Basilica of Saint Francis of Assisi. They purchased this cross for us at the Basilica.

The Basilica of Saint Francis of Assisi is the mother church of the Roman Catholic Order of Friars Minor Conventual in Assisi, a town in the Umbria region in central Italy, where Saint Francis was born and died. The basilica is a distinctive landmark to those approaching Assisi.

Pope Gregory IX canonized Francis on 16 July 1228. Along with Saint Catherine of Siena, he was designated Patron saint of Italy. He later became associated with patronage of animals and the natural environment, and it became customary for Catholic and Anglican churches to hold ceremonies blessing animals on his feast day of 4 October. He is often remembered as the patron saint of animals.


Return to Wall of Crosses