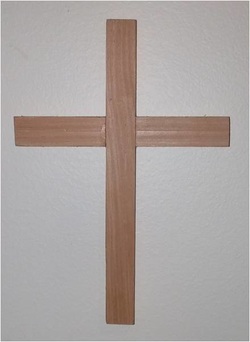 In 1971 Bunny and Rich accepted Calls to be teachers of the two room school, St. John’s Lutheran of New Minden, Illinois.

Immigrants from Minden, Germany founded the church in 1846. They constructed a small one-room building used as the church, school and parsonage.

In 1863 a substantial building was constructed from locally quarried stone. That building is still in use today.

Before 1971 the church had been struck twice by tornados, the walls of the building standing while the steeple and roof were destroyed. The second tornado sent the large bell crashing through the organ bellows, resulting in an electric fan replacing the hand pumped bellows.

On November 17, 2013, the church was once again struck by a tornado – the walls withstood the onslaught, but the steeple and rook were destroyed.

On Sunday, August 9, 2015, the restored church was rededicated.

As part of the ceremony, Bob Langrehr made and distributed wooden crosses constructed from timbers that were part of the third steeple of St. John’s Lutheran Church for 106 years, from 1907 until 2013. Each cross is a 11.0% scale model of the cross that stood on top of that steeple. Bob reflects on the process of making the crosses and proclaims the love of Jesus Christ with these words:

Mass producing almost 700 crosses was a very tedious and time-consuming job, and the worker concluded it was impossible to produce even one perfect cross. Try as he may, at the pace he was working, every cross had various imperfections. Maybe a spot of exposed glue, a pencil mark, a slightly tilted cross bar, one arm a fraction of an inch longer than the other, not deep enough of a notch in the center, and the very common saw markings. "I can sand the saw marks away," he thought, but that often just created a different flaw: the piece became too thin.

Each of the imperfections in your cross are like the sins we commit daily. Instead of asking the people to overlook the flaws and receive their forgiveness the worker tried to hide his mistakes. We often try to hide our sins from God. Doing so, we commit more, and often worse, sins. None of you can correct the flaws of your cross and make it perfect, and none of us can live a sin-free life. God knows and understands this, so He sent Jesus to die on a rugged cross to pay for our sins. God can forgive all of your sins and make you perfect in His eyes. All you need to do is sincerely ask for His forgiveness.

Please take your cross home and put it where you will see it daily, and be reminded that its flaws represent your sins, and daily ask for God's forgiveness.

Return to Wall of Crosses